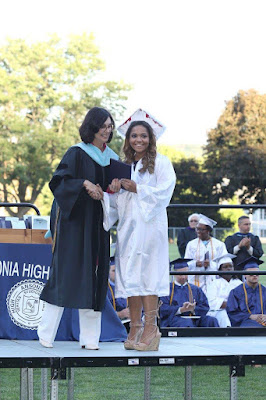 On Sunday, July 10, 2016, the Julian A. Taylor Scholarship committee will present 2016 Ansonia High School graduate Adreeana  Cox the $5,000 Julian A. Taylor Scholarship Award at its annual award dinner.  The award is given to the highest-ranking African American graduating senior in Ansonia High School accepted by a four- year college/university. Adreeana will attend The University of Tampa in the fall.

The Julian A. Taylor Scholarship Fund was established in 1981 to honor and continue the ideals of the late Rev. Dr. Julian A. Taylor, former Pastor of Macedonia Baptist Church.  Like the late Dr. Taylor, the committee endeavors to motivate and to foster the importance of education to African American Students in the Ansonia Public School District.  Believing in the importance of reaching students as early as possible in addition to the $5,000 award, 22 students in grades three through eleven will be honored as Julian A. Taylor (J.A.T.) Scholars receiving awards of $100.00 each.  Over the past 34 years, the committee has provided $173,000 in scholarships.
J.A.T. Scholar award winners are: Mead School students—Trioni Wright, Jasmine Duffus, April Walfall, Symone Finney, Felicity O’Brien, Marisol Laureano, Louis Gripper, Brianah Akins; Prendergast School –- Jada Sampson,  Kierra Thomas, Eniyah Lawrence, Jaden Napoleon, Adalee Evans, Maqila Mosley-Williams, Xavier Coverson-Twyne, Sa’ray Allen; Ansonia Middle School –-Maliqua Mosely-Williams, Hawa Camara, Jordan-Sahara Credle;  Ansonia High School – Ekettee Weamie, Stephanie Umeugo, and Berlove Lelain.
The event Guest Speaker is Superior Court Judge Erika Tindill. Judge Tindill currently sits in the Stamford-Norwalk Judicial District.  She served in the Malloy administration as Chair of the Connecticut Board of Pardons and Paroles from 2011 -2014. She held the position of Executive Director of the Connecticut Coalition Against Domestic Violence and Deputy Director for New Haven Legal Assistance Association, Inc.
The award dinner will be held on Sunday, July 10, 2016 at Grassy Hill Country Club, 441 Clark Lane, Orange CT at 2:00 P.M.  Ticket Donations are $35.00. For ticket information please contact Surether Belton at (203) 735-1470 or Diane Stroman at (203) 645-9635.
By Jean Falbo-Sosnovich - July 08, 2016