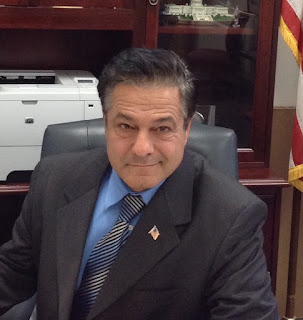 As Mayor of Ansonia, I am grateful for the support that the city has received from state legislators Joseph Crisco and Linda Gentile over the past two decades. However, it is clear that the residents of our great city – and of Connecticut in general – would be well served by a change in direction.  It is simply the right moment to pass the baton to a new generation of leaders and to embrace a fresh approach to fixing our state’s problems.
For this reason I have decided to endorse two Ansonia residents seeking state o(ce: George Logan for 17th District State Senate and Joseph Jaumann for 104th District State Representative.
I believe that both candidates will serve as strong advocates for the City of Ansonia and fight for policies that will have a meaningful impact on our community. Specifically, I applaud their
positions on reducing state taxes, addressing the inequalities in the state’s education funding system and creating a business friendly environment to attract jobs and investment back to Connecticut.
In George Logan I see an experienced business executive with the know-how to develop sound budgets and innovative solutions. He is a proven leader capable of pulling Hartford from the swamp of red-tape and bureaucracy it finds itself sinking in. Mr. Logan boasts a resume that evinces a commitment to community service and local volunteerism, from his work on the Griffin Hospital and YMCA Board of Directors to his time as a youth basketball coach.
With respect to Joseph Jaumann, I am impressed by his commitment to combatting excessive
taxation and eliminating the obstacles that deter job-making business investments from our state. Mr. Jaumann has already demonstrated a passion for fostering smart economic growth as Chairman of the Planning and Zoning Commission. I am confident that he will bring that same philosophy to Hartford. Mr.Jaumann’ s background as a successful attorney and litagator has also equipped him with the skills necessary to take on the status quo attitudes prevalent in our state legislature.
I am proud to stand by members of my Ansonia Republican team, George Logan and Joseph Jaumann, in  their quest to better serve the residents of Ansonia and Connecticut. I am confident that they will deliver the high caliber of public leadership that our wonderful community deserves.
-David S. Cassetti
(This is a letter from Ansonia Mayor David Cassetti)
By Jean Falbo-Sosnovich - October 31, 2016