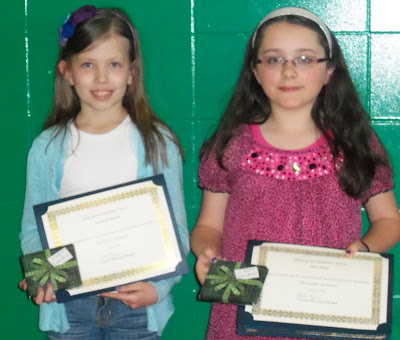 
The contest is designed to support the fifth-grade curriculum of Connecticut studies.
Its objectives are to stimulate pride in Connecticut; heighten awareness of the state’s many historical, cultural and entertainment offerings; encourage good citizenship; and reinforce creative writing skills or possibly their computer skills.
The contest provides students with an opportunity to demonstrate their knowledge and skills.


During a recent school-wide assembly to celebrate the achievements both students were presented with a Certificate of Excellence and a gift card to Barnes and Noble book store.

Congratulations on your awards, Natalia and Alexis!