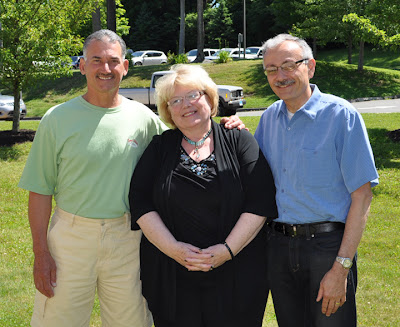 Pictured from left are Robert Lisi, Lynn Bennett-Wallick, and Lawrence DiPalma. The three retiring administrators have a combined 105 years in the field of education. Photo by Eileen Ehman

ANSONIA – When the final day of the 2011-12 school year ended June 7, three of Ansonia’s administrators said goodbye to their last classes of students.
All three are retiring at the end of June. They are: Robert Lisi, interim principal of Ansonia High School; Lynn Bennett-Wallick, principal of Ansonia Middle School; and Lawrence DiPalma, principal of John G. Prendergast School.
Each administrator was honored by their peers, family, and members of the community at dinners or picnics held this spring.
Together, the three administrators have 105 years in the field.
Lisi is a 37-year educator, starting and finishing his career in Ansonia Public Schools. He has spent the last 16 years of his career at Ansonia High School, serving as assistant principal until February, when he assumed the role of interim principal.
Lisi obtained three education degrees from Southern Connecticut State University: a B.S. degree in Health Education in 1974, a M.S. degree in Special Education in 1980, and a Sixth-year degree in Educational Administration and Supervision in 1982.
He started his career as a special education teacher at AHS in 1975, spent one year as a high school science teacher, then seven years as director and teacher of the Alternative High School for the school district.
In 1986, he was appointed as Supervisor of Special Education, a position he held until returning to AHS as assistant principal in 1996. Among his community activities, Lisi has been a long-time member of the Board of Directors for the Parent Child Resource Center, serving as president from 1991-1994.
Bennett-Wallick spent nearly all of her education career in Ansonia. A biology teacher for many years at Ansonia High School, she was selected as Ansonia’s Teacher of the Year in 1998. She began her teaching career at St. Joseph and Assumption Schools in Ansonia and joined the Ansonia Public Schools in 1984. Bennett-Wallick joined the administrative ranks in 2003 as assistant principal of AMS, then became principal in 2004.
Bennett-Wallick received her B.S. degree in Biology/Chemistry secondary education from Cardinal Cushing College; her M.S. degree in Health Education from SCSU; a 30 credit program in Educational Leadership from St. Joseph College; and a sixth-year degree in Foundations in Education from SCSU. She has also served as business agent for the Connecticut State Federation of Teachers.
DiPalma is retiring after 40 years in the education field. Principal of Prendergast School for the past two years, he joined the Ansonia school district in 2008 as an Assistant Principal of Prendergast. Carol Merlone, Superintendent of Schools, said she recruited DiPalma for what he will be remembered: “I brought Larry to Ansonia to revamp the way we teach math in the elementary grades. We call it ‘DiPalma Math’ for a reason. It changed our teaching, and our students’ mastery of math increased dramatically,” she said.
DiPalma has worked in a variety of private and public schools throughout his career, which began in West Haven in 1972. He has been principal of two parochial elementary schools in Connecticut, principal of the Highville Charter School in Hamden, and a math teacher and department chair for nine years for a public middle school in Norwalk.
He received a B.A. degree in Liberal Arts from the College of the Holy Cross in 1972; his master’s degree in Education from Bridgeport University in 1986; and a sixth year degree in Administration from Sacred Heart University in 1990.
In addition to DiPalma Math, he will be remembered as the Connecticut winner of the National Distinguished Principal Award in 2011.
“We are grateful to these three veteran educators who helped move our district forward, especially over these last several years,” Merlone said. “They provided strong leadership when it was needed the most. I wish them the best in this next phase of their lives.”
By Patti - June 19, 2012