On Derby Day Saturday members of the Valley Arts Council unveiled a dozen portraits of some of the stars who performed at the stately Sterling Opera House on Elizabeth Street in Derby. The building, built in 1889, was used as a theater until 1945.
The portraits now grace the windows facing Elizabeth Street and the Green, as well as those on side doors that face a walkway.

A $1,000 grant from the Valley Community Foundation funded the project. 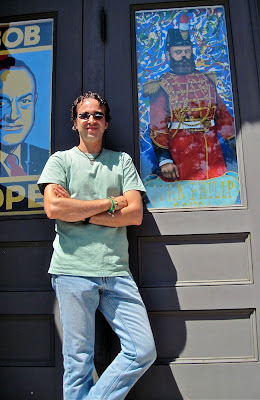 Here Valley Arts Council vice president Steve DiRienzo of Derby stands next to his creation, an oil and acrylic painting of the legendary band leader John Philip Sousa, who wrote several patriotic marches, including "Stars and Stripes Forever."
His band played at the opera house in the early 1900s.

DiRienzo said Sousa, garbed in a bright red band uniform, may have been the inspiration for the Beatles' Sgt. Pepper character on the cover of their 1967 album, "Sgt. Pepper's Lonely Hearts Club Band."
He said the tuba-like musical instrument called the sousaphone was named after Sousa, and the person who may have been the first to manufacture the sousaphone was named J.W. Pepper. Coincidence? Who knows?

DiRienzo said, "It's an open-ended exhibit geared to draw attention to the building." He said he'd like "to eventually have (the portraits) in the gallery, and have a reception for the artists." 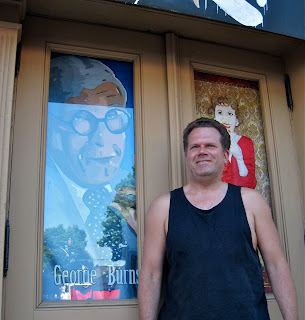 Shelton artist Len Grayeck stands next to his painting of the legendary comedian George Burns, who performed on the opera house stage in the glory days of vaudeville.
Behind him is a fabulous fiber-art portrait of Burns' beloved wife, Gracie Allen, created by Shelton fiber artist Karen Loprete.

Grayeck said Burns' round eyeglass frames and cigar "are almost iconic." He said he chose to capture Burns' look from the 1980s.
"I like the fact that he did it all," Grayeck said. "He started in vaudeville, went to radio, and then did TV and films."

These 12 portraits created by 11 artists (council president Rich DiCarlo who came up with the original idea created two) are truly outstanding.

They're definitely worth a trip to downtown Derby to see!
This exhibit almost makes me want to get some paints and try my hand at dabbling on canvas. Almost.

Since the artwork will be up for awhile, I plan to photograph the rest of the photos and share them here at a future date. Stay tuned.
By Patti - June 21, 2012

This is a wonderful opportunity to blend the arts with history