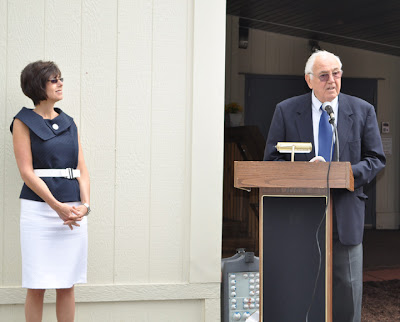 Adzima's career in education was detailed in a program from the ceremony and is reprinted here.


"John J. Adzima Jr. served the City of Ansonia as a principal and Central Office Administrator for the public school district for more than 25 years.
"He was a strong leader who worked tirelessly for the children of Ansonia, and this is why it is a fitting tribute to name the Anso nia Pre-K Program as the John J. Adzima Jr. Preschool Academy.

"He started his 32-year career in education teaching sixth grade in Meriden before taking a position at Seymour Junior High School (which later be- came Seymour Middle School). In 1965, he was named the first principal of Seymour’s Chatfield School. Two years later, he came home to Ansonia, serving in several capacities: Principal of Prendergast School, Principal of the former Larkin School, and Principal of Mead School, all elementary schools.

"He concluded his career as a Central Office Administrator in charge of instruction for Grades K-8 and coordinator of Chapter I, Staff Development, EERA and Testing before retiring in 1992.

"During his retirement, Mr. Adzima continued to remain active in the community. He obtained several grants that led to the construction of the Redwing Pond House, a preschool building located on the property of the Ansonia Nature Center. Redwing was one of the first homes of the Ansonia Pre-K program, which moved to its current location in Ansonia Middle School in 2009.

"Mr. Adzima died January 1, 2012 after a life of service to the City of Ansonia. His life and career were devoted to helping others and his wish was for that legacy to be carried forward."